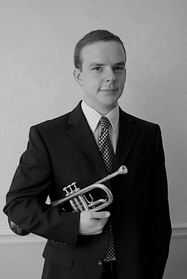 Brandon Norton’s career as a musician has spanned more than a decade and has covered most of the Eastern United States. He is an avid large ensemble musician who has performed with multiple orchestras, wind ensembles, brass bands, and pit orchestras throughout the east coast. Outside of the United States, he was a member of the Symphonic Voyages cruise orchestra in 2011.  As a student, he played Principal Trumpet with numerous ensembles, including the Peabody Symphony Orchestra, the Peabody Wind Ensemble, and the Columbus State University Wind Ensemble.
Mr. Norton is also a soloist and chamber musician, regularly presenting solo and brass quintet recitals.  He was a founding member of both the Shogun Brass and The Valley Brass Quintet. As a member of The Peabody Institute Trumpet Ensemble, he was a finalist at the 2011 National Trumpet Competition.
Mr. Norton is a dedicated pedagogue, currently serving as Lead Teaching Artist with the Hartford Symphony’s CityMusic program. With this "el sistema" program, he teaches brass instruments and general music skills to students in the Frog Hollow neighborhood of Hartford. Before relocating to Connecticut, he was a faculty member of the International School of Music in Bethesda, Maryland and several other schools in the Baltimore/Washington D.C. area. Several of Mr. Norton’s private students have gone on to pursue careers in trumpet performance and music education.
Brandon is a native of Phenix City, Alabama, where he began playing trumpet at age 12. He obtained his Bachelor of Music degree from Columbus State University and  his Master of Music degree from The Peabody Institute of The Johns Hopkins University. His primary teachers include Moffatt Williams, Joe Burgstaller, and Edward Hoffman.