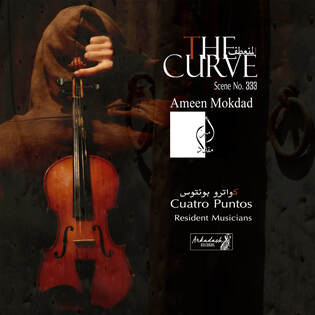 Iraqi composer and multi-instrumentalist Ameen Mokdad was trapped in hiding under the brutality of ISIS for two years in Mosul. During that time he survived and told his story by writing an extraordinary repertoire of music… in secret. He arranged it for a collaborative album with Cuatro Puntos Ensemble. It was recorded with Ameen playing violin & various Iraqi percussion instruments, reciting his own Arabic poetry, and singing. These 19 songs form a soundscape that transverses a range of emotions: fear, defeat, hope, and rebirth.

Listen to The Curve on Spotify
Listen to The Curve on Youtube
THE CURVE has had live performances around the world since its creation in Mosul, Iraq. The album has enjoyed truly international status, with appearances in films, airtime on NPR, and steady album sales + streaming worldwide. Now Ameen joins Cuatro Puntos Ensemble to tell his story live to American audiences for the first time.
AVAILABLE: Contact to book any or all options

CONTACT US:
If you are a church, cathedral, or other venue connected with the Episcopal Church, please contact our partners at Christ Church Cathedral in Hartford:  engaging.thearts@cccathedral.org (860) 527-7231

If you are any other venue or interested party, please contact Kevin Bishop, Executive Director of Cuatro Puntos: kevin@cuatropuntos.org (860) 498-3279

Support with purchase of CD or download
FORWARD
by Kevin Bishop
I met Ameen Mokdad in the summer of 2018 while we were both volunteering as music teachers in a program for refugee and local children in Eastern Turkey, along the border with Syria. We were roommates in a magnificent and ancient hotel made entirely of stone blocks. It overlooked the Mesopotamian Valley: a bucolic and green expanse that, despite its beauty and history as the cradle of civilization, is now a hotbed intersection of three countries: Turkey, Syria, and Iraq. Ameen and I immediately became friends. Although on the surface it might appear we come from two different worlds, we quickly found that we had many relatable experiences. We also shared a very similar world view, and even the same subtly sarcastic sense of humor. Every night we would stay up until the wee hours of the morning as Ameen told mind-blowing stories of his trials and hardships during the occupation of Mosul by ISIS. However, despite the fact it was he who had to hide himself and his music, it was he who had ISIS run him out of his home and destroy all of his instruments, and it was he who directly experienced all of the trials and trauma of war outside his door, he viewed it and spoke of it with a remarkably global world view. While many people who experience trauma and war get stuck inside themselves and controlled by what they've experienced, it was immediately clear that Ameen used his music to not only heal himself, but also those around him. His shocking and horrific stories were told in a way that both recognized the injustice done to him and so many others, but also recognized that this injustice is an anomaly. He recognized the potential for good in all people, and even spoke with compassion about the misguided young men who had been brainwashed into doing unspeakable things in Mosul. And, imbued in every crazy story was at least one sarcastic comment that would leave us both laughing hysterically before taking a break to run out in the middle of the night for delicious Turkish sweets.
Personally, I have searched the world for pure, authentic, and meaningful musical experiences and connections. This is part of my own healing. I can say I have not found a more genuine and effective example of someone using music to heal than Ameen Mokdad. Just knowing him has helped heal me and re-invigorate my own love of music. He has taken great injustice and countered it by giving back to the world. Once ISIS was expelled from Mosul, he even went back and started the Light Orchestra, despite continued other threats, in order to spread his infectious and healing love of music to others. The most amazing part about the Light Orchestra is that it is truly WORKING. In my own experience and research, "social music" programs very often fall short of their goals. Intentions might be grand, but execution is very difficult and the intent of even the most passionate organizer might be a little self-serving. However, Ameen is selfless and genuine in his belief that music heals. At its core this is a simple, yet powerful, belief. He uses both the power of his conviction, as well as his warm personality, to inspire others. Ameen has an immediate radar for those in the world who mean well and those who do not, and he shields himself and those he cares about from anyone with self-serving intentions. I've had the opportunity to sit in on some of Ameen's lessons with the Light Orchestra. I’ve never seen a group of young adults who have never played an instrument learn so quickly and so well. They love him, and he loves them. They all love music with a fiery passion.
It has been a great honor in my life to work on The Curve album with Ameen Mokdad over the past two years. The greatest honor is that Ameen has trusted my colleagues and I with his music. His music is deeply personal and emotional. These songs are his children. Ameen allowed us to be co-parents to his children as we helped shape his compositions. He let his children fly, uncertain of what might happen to them.
This album is entirely written and directed by Ameen. He wrote down all the sheet music for string quartet based on his compositions made while in hiding in Mosul. He told me he wrote the arrangements while looking at photos of our quartet so that each part would be personal to the player. Throughout production, he also directed the creative process.  At the same time, he allowed us freedom to add our own personality and interpretation. The result is a synergistic soundscape that is a true cross-cultural collaboration.
The Curve is not an ending, but a beginning. In this collaboration we put friendship and kindness above all, and now the creative flood gates have opened. Many additional projects and opportunities have come as a result- both together between Ameen and Cuatro Puntos, and with others we have met as a result.  For as Ameen says, "for sure you have wings". 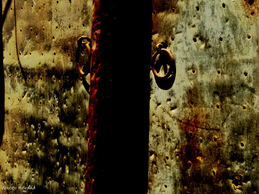 An opening gate in Mosul, photo by Ameen Mokdad
About the Tracks
1. Fear
When it's comes to your soul, you will lose the sense of time, light and space
​The best way to defeat that storm, put it in a jar and look at it , listen to it .
2. Wenn
If...
...لو
3. From Her (Scene no. 203)
Every time your smiles are on
Every star of hope are shows
Tells the world that every night
In the end there is a dawn
منها ... المشهد 203
في كل يوم تبتسم
نجوم الامل ستشرق
تخبر العالم ان كل ليلة مظلمه
نهايتها فجر
4. Havoc
​Many wars I have lived
Many tears I witnessed
Many souls have lost their light Still not sure if I got killed.
خراب
5. Clouds
Waiting ... waiting .... waiting. New pain , more tiredness, or another death behind this waiting ? There is nothing to trace, there is no sign that leads us to any direction,no compass, for waiting surrounds us from all directions and leads us to all directions. A huge, suffocating and long waiting, and a hope in one sign, only one. A storm shows in the horizon . There is thunder and lightning, there will rain followed by the sun. There is life. The clouds are heavy, very heavy and covering the sun, the stars, covering the day and the night.
غيم
انتظار....انتظار....انتظار. ألم جديد ام تعب اكبر ام موت آخر خلف هذا الانتظار؟ ما من أثر نقتفيه، ما من اشارة تقودنا الى اي اتجاه وما من بوصلة، فالانتظار وحده يحيطنا من كل الإتجاهات ويؤدي بنا الى كل الإتجاهات. انتظار كبير، خانق وطويل والأمل في اشارة واحدة، اشارة واحدة فقط. عاصفة تلوح في الأفق. هنالك رعد وبرق هنالك مطر سيتبع بشمس. هنالك حياة. فالغيم ثقيل، ثقيل جدا يخفي الشمس والنجوم يغطي الليل والنهار.

7. Yoqaal
When I was there everybody said :" you are regretting to be back in this city of Mosul because it’s a big jail now, no one dare to do anything even to dream " I couldn’t say a word, I said Yoqaal . that was the story behind the Yoqaal.
يقال
​عندما كنت هناك قال الكل " انت تشعر بالندم لعودتك لمدينة الموصل لأنها سجن كبيرالان , لا احد يجرأ لفعل اي شيء حتى ان يحلم " لم استطع البوح بكلمه , غير يقال . و تلك هي القصة خلف هذه المقطوعة . 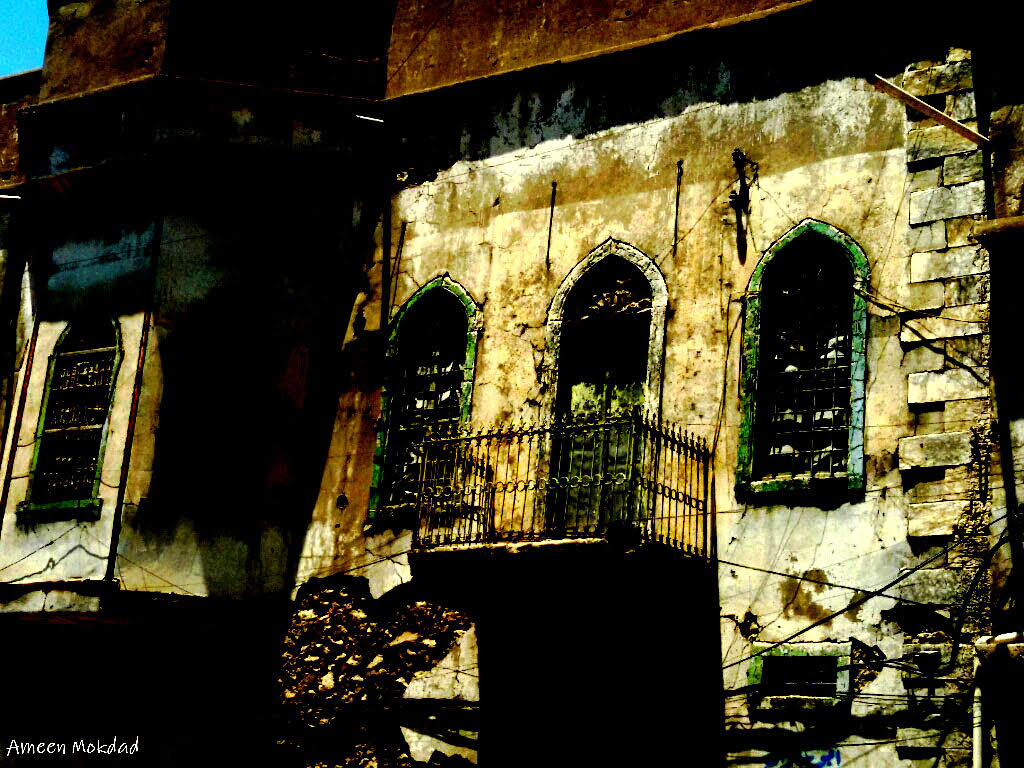