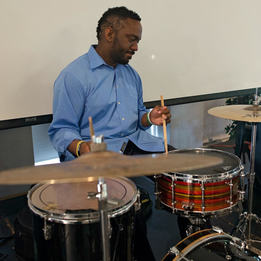 Dexter Pettaway received the gift of music at the tender age of two. He played throughout his elementary and highschool years being noted as the "most musical" person. That expression would later follow him throughout his musical career where he continued to wow crowds by sharing his gift of music through the expressions of playing drums and keyboards. He received his studies from Wesleyan University, Manchester Community College and the University of Hartford where he focused on jazz studies.

After winning the Berkley College jazz competition as best drummer and musician, he released an educational DVD entitle "Dramatic". Dexter is endorsed by Paiste Cymbals and continues to share his passion and zeal for the arts via his jazz band entitled "Dexters Lab" and through his many talents and gifts of music where he continually captivates audiences young and old.

Dexter Pettaway Is dedicated to the idea that Christianity and music, two of the greatest forces in our world, can effectively merge to wash away "the dust of everyday life" from our souls.