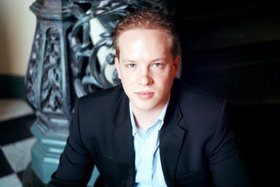 Conductor and pianist Joshua Horsch is a dynamic musician who is equally comfortable in the worlds of orchestral music, opera, choral music, chamber music, and solo performance.  Joshua is currently Assistant Conductor/Pianist for Fort Worth Opera’s world premiere performances of Libby Larsen’s opera “A Wrinkle in Time.”  Joshua recently conducted the world premiere preview performances of “A Wrinkle in Time” at the University of Colorado’s New Opera Workshop.  Additionally, Joshua is currently Assistant Chorus Master for the acclaimed Colorado Music Festival.  Joshua is a doctoral fellow and graduate assistant at the University of Colorado Boulder where he serves as Co-Music Director/Conductor of the Campus Symphony, Assistant Conductor for the Symphony and Chamber Orchestras, Assistant Conductor for the award winning CU Opera program, Conductor/Pianist for the Colorado New Music Ensemble, Conductor for PENDULUM New Music Ensemble, and as an instructor of piano in the Continuing Education Division.
Joshua made his conducting debut with the Baltimore Symphony Orchestra while being mentored by BSO Music Director Marin Alsop at the June 2012 Conductors Guild Workshop.  Since his acclaimed debut in 2010, Joshua has served as a festival artist with the Newport Music Festival where he works as a conductor and pianist.  From 2010-2012, Joshua was on the conducting staff of Boston Opera Collaborative where he served as Music Director/Conductor for the fall 2011 production of "Opera Goes to Hell" and as Assistant Music Director/Conductor for the fall 2010 production of Mark Adamo’s “Little Women.”  A passionate advocate for music education, Joshua spent two years as Music Director of the Portsmouth Abbey School where he directed the orchestra, choirs, musical theater productions, jazz ensemble, a cappella groups, and chamber music program.  Joshua’s previous positions include Music Director/Conductor of the Penn State Campus Orchestra, Assistant Conductor of the Penn State Philharmonic and Chamber Orchestras, Conductor/Artistic Advisor of the Penn State Innovation Orchestra, Music Director/Conductor of the Ithaca Opera Project, Co-Music Director/Conductor of the Ithaca College String Orchestra, and Assistant Conductor of the Ithaca Community Orchestra.
As part of both the 2008 and 2011 International Conductors Festival in Kiev, Ukraine, Joshua conducted eight concerts with the Lyatoshinsky Chamber Orchestra at the National House of Organ and Chamber Music in Kiev. As a participant in the renowned Oregon Bach Festival Master Class in choral-orchestral conducting, Joshua conducted the Grammy-Award winning Oregon Bach Festival Orchestra and Chorus while studying with celebrated Bach conductor/scholar Helmuth Rilling. At the Cabrillo Festival of Contemporary Music, Joshua studied with Baltimore Symphony Music Director Marin Alsop and legendary conducting pedagogue Gustav Meier. As a four time participant in the International Conducting Workshop and Festival, Joshua has conducted the Bohuslav Martinu Philharmonic and the Orquestra Filharmonia de Chihuahua while studying with prominent conducting pedagogues Gustav Meier, Larry Rachleff, and Donald Schleicher.
As a pianist, Joshua has performed across the United States at venues such as the Seagle Music Colony, Newport Music Festival, the U.S. State Department, Peabody Conservatory, and An Die Musik Live! in Baltimore, MD.  Joshua has collaborated with renowned composer Libby Larsen in a highly praised recital of her songs.  As a chamber musician, Joshua performs internationally with the SoundScape Trio.  As a concerto soloist, Joshua has performed concerti with the Ithaca College Wind Ensemble and the University of Colorado Campus Orchestra.  Joshua was a semi-finalist at both the MTNA National Piano Competition and the Oberlin International Piano Competition.  Joshua has previously served as a piano instructor at the International School of Music in Bethesda, MD and at the Central Pennsylvania Arts Conservatory.  Joshua received a Master of Music degree in Orchestral Conducting from the Pennsylvania State University and a Bachelor of Music degree in Piano Performance from Ithaca College.
Back to About Us