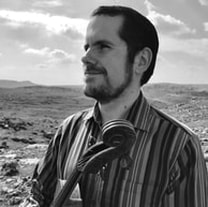 Kevin’s life work serves the ideal of “music as social action”: the belief that long-term music education can aid community building, personal elevation, and reconstruction. His varied career as a violist, violinist, conductor, composer, educator, researcher, and arts administrator has taken him around the world to study, witness, engage with, and lead social music projects. Having grown up in a broken home amid a troubled neighborhood near Los Angeles, his entrepreneurial career began young when he founded the Western Society of Chamber Music after tragedy caused the demise of his school’s music program. He led this organization and its community-minded efforts for 8 years before moving to Connecticut and founding Cuatro Puntos in 2012. Vía Cuatro Puntos he worked with an El Sistema program in Bolivia for two summers, then in Afghanistan for three. Kevin eventually became Director of Orchestral Studies at the Afghanistan National Institute of Music, living in Afghanistan for an extended period. During this time he led the country’s only orchestra in numerous concerts for presidents and ambassadors. He prepared and led the country’s first female conductors with the Afghan Women’s Orchestra "Zohra" in concerts across Europe, including the closing ceremony of the World Economic Forum in Switzerland.  As part of his founding and directing of Cuatro Puntos Kevin is currently music director and co-founder of the Music Moves Hartford Street Choir, a program in shelters and soup kitchens that serves adults in Hartford who face homelessness and displacement. He was previously Co-Founder and orchestra director of Müzikhane Social Music School, teaching local and refugee children while living near the Syrian border in Southeastern Turkey. Kevin composes and records music inspired by the traditions and people he encounters, and he has both compositions and performances published on albums via the Arkadash, Toccata Classics and Métier labels. Speaking of a solo viola track on the Toccata Classics label, Fanfare Magazine said he plays with “great intensity”. In a review of one of Kevin's compositions on the Métier label, Fanfare said "Bishop’s music has a convincing unity of purpose and direction that is captivating, even engrossing". Kevin has conducted on some of the biggest stages in Europe the likes of the Zurich Tonhalle, performed viola recitals at Carnegie Hall and Lincoln Center, won international competitions,  performed chamber music on four continents, lectured at universities across the USA and Europe the likes of New England Conservatory (Boston) and the Institute for Cultural Diplomacy (Germany), and presented at conferences on "music as social action" around the world. Kevin is also founder of the Connecticut Elementary Honor Orchestra, which he first organized with a group of 100 elementary students from around the state while he was teaching at UConn. Two years later the ensemble became part of CMEA, and is now the an All-State orchestra equivalent for elementary level.  Kevin likes to keep things light, and has performed and recorded over 500 of his own arrangements of popular music. This has led to performances at the Grammy Awards, with the band Foo Fighters, and with members of Led Zeppelin. He practices the dumbek for fun. Kevin has degrees from the University of California (BM), University of Hartford (MM) and Institute for Cultural Diplomacy. His primary teachers (viola) have been Helen Callus, Donald McInnes, and Steve Larson. In all of his work Kevin aims to have fun and cultivate lasting friendships while exploring music's potential as one of many relevant, viable, and complementary methods for creating a more just and inclusive society.

Back to About CP