Welcome! Scroll down to view the live chat and program notes.
You are as much a part of this event as our panelists. Please type questions and comments in the live chat box above. Panelists will be answering your questions throughout the event.
*** If a message pops up that says "sign in to chat", you will use your Gmail, Google, or YouTube user name and password.
Alternately, you may comment on Facebook by clicking here.
Click to enter livestream
This link is now active.

This panel discussion will provide insight and give voice to contemporary and classical artists who use their art against injustice. We dive into the long tradition of artists who risk censorship, arrest and more so to have their art impact positive change. Some artists in this lineage are Pablo Casal’s protest against fascism in Spain, Woody Guthrie, Billy Holiday, Bob Dylan, Rage Against the Machine, Beyonce and many others. Join panelists Dr. Allan Ballinger of Cuatro Puntos Ensemble, USJ Professor of Political Science Kenneth Long, Ameed Mokdad, Iraqi composer and multi- instrumentalist and Activist Songbook co-founders Aaron Jaffaris and Byron Au Yong.
Click to register for concert on Sun 11/15 2pm EST
Make a donation to support this series
Please scroll to the bottom to see the ways you can support these musicians right now, for free, with follows!

Ameen Mokdad - broadcasting from Baghdad, Iraq
Ameen Mokdad, born 1989 in Baghdad, graduated from the  Agriculture and Forestry College at the University of Mosul in 2013. He lived in the Northern Iraqi city of Mosul from 2003 until after the ISIS occupation. Ameen started learning and making music in 2009 and has been composing for film and theatre since 2014. He has acted in and directed experimental theatre plays since 2017,  and has worked as a music teacher and conductor since 2018. In 2019 he founded the Light Orchestra in the city of Mosul.  He is a composer and musician in the play Taqasim Ala Alhayat, written by the Iraqi director Jawad al-Asadi and based on Anton Chekhov's novel Ward No. 6.  Taqasim Ala Alhayat had presentations at the 11th Arab Theater Festival in Cairo (2019), the 54th International Festival of Carthage (2018) and at the Muntada Theater in Baghdad (2018). He are regularly curated and performed in street performances as a musician and dancer since 2017 across Iraqi cities, keeping with his deep personal belief that music should be brought to people where they are. He has also been a member of TARKIB Baghdad Contemporary Arts Institute since 2017. Ameen has an internationally acclaimed album called The Curve , featuring music written in the city of Mosul during ISIS occupation. He recorded The Curve alongside the American Cuatro Puntos Ensemble, and it has since received International  acclaim.  You can hear Ameen's music by searching "Ameen Mokdad" on Youtube, Spotify, Apple Music, Amazon Music, Aghami, or on any other major streaming service. 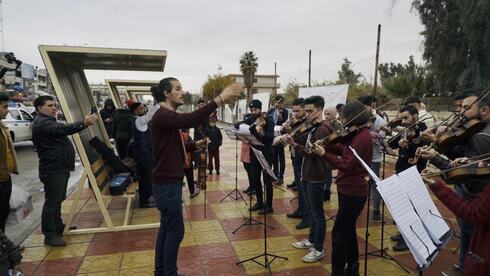 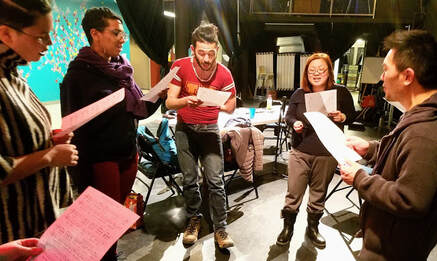 Activist Songbook Rehearsal
Aaron Jafferis - broadcasting from New Haven, CT
Aaron Jafferis is a hip-hop poet and playwright whose musicals The Ones, Trigger, (Be)longing, Stuck Elevator, How to Break, Kingdom, Shakespeare: The Remix, and No Lie have won a Creative Capital Award, Richard Rodgers Award, Sundance Institute / Time Warner Fellowship, NEA Art Works Grant, NEFA National Theatre Project Grant, Edgerton Foundation New American Play Award, Barbour Playwright’s Award, NYMF Most Promising New Musical Award, and multiple MacDowell Fellowships.  Trigger, aka (Be)longing (music by Byron Au Yong) premiered at the Center for the Arts at Virginia Tech as part of the 10-year memorial of the Virginia Tech shooting, moved on to MDC Live Arts, International Festival of Arts & Ideas/Long Wharf Theaatre and is currently being developed with director Lisa Peterson. Stuck Elevator (music by Byron Au Yong) premiered at the American Conservatory Theatre, where it won two San Francisco Bay Area Theatre Critics Circle Awards, including best original musical, and was named “high point of the theatrical year” by the San Francisco Chronicle. Activist Songbook (music by Byron Au Yong) the third work in Aaron and Byron’s trilogy, was commissioned by the Asian Arts Initiative and the International Festival of Arts & Ideas, and launched by the Asian Arts Initiative and Montalvo Arts Center. How to Break (music by Rebecca Hart, Yako 440 & Jacinth Greywoode, choreography by Kwikstep & Rokafella) was developed by Norway’s National Theatre, SPKRBX, Hip-Hop Theatre Festival, HERE, Collective Consciousness, NAMT, HartBeat Ensemble, and the Village Theatre, and is a New Victory Theatre LabWorks selection for 2018-19. Kingdom (music by Ian Williams) has been produced by The Old Globe (world premiere, Critic’s Choice, San Diego Union-Tribune), Bregamos Theatre and ReVision Theatre (Best Musical and Best Book, Newark Star-Ledger) and was developed by the Public Theatre, Atlantic Theatre, NAMT, NYMF and many others. Shakespeare: The Remix (music by Gihieh Lee) was commissioned and premiered by TheatreWorks/Silicon Valley, and produced by Saratoga Shakespeare Company, Zachary Scott Theatre, St. Louis Black Rep, Collective Consciousness Theatre, and Capital Repertory Theatre (ongoing school tour). Current projects include commissions from Long Wharf Theatre (Prison, with Antonio Fernandez) and the Asian Arts Initiative (Activist Songbook, with Byron Au Yong); Smooth Criminal – a hip-hop play about a nerdy white kid desperate to liberate his people as soon as he can figure out who they are; and a touring solo show with accompanying workshops – What Is Race and How Did I Catch It? Aaron is also one of the national playwrights and New Haven organizers of Oregon Shakespeare Festival/One-Minute Play Festival’s Every 28 Hours Project. He worked with Integrated Refugee and Immigrant Services and dozens of refugees from around the world to create Stories of a New America, a play touring with Collective Consciousness Theatre. Aaron received his BA in Arts & Social Change from the University of California at Berkeley, studied at the Universidad Nacional Autónoma de México, and received his MFA in Musical Theatre Writing from NYU, where he was an Alberto Vilar Global Fellow in the Performing Arts. A former Open Rap Slam champion at the National Poetry Slam Championships, Aaron founded The Word poetry-in-the-schools program in New Haven, and teaches hip-hop theatre for liberation in schools, colleges, and organizations nationwide. www.aaronjafferis.com. 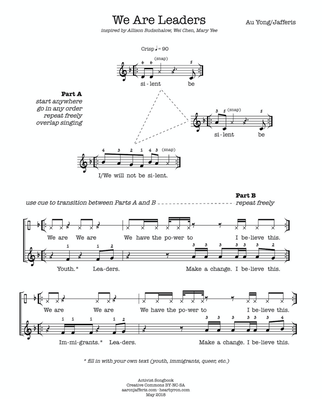 Excerpt from Activist Songbook
Allan Ballinger - broadcasting from East Windsor, CT
​Dr. Allan Ballinger is a cellist with the Cuatro Puntos Ensemble, a multi-faceted, arts non-profit organization based in Hartford, CT that is dedicated to intercultural dialogue and universal access through the performance, writing, and teaching of music.  He is also an assistant professor of history at Gateway Community College in New Haven, CT, both activities reflecting his lifelong commitment to empowering the disenfranchised and underserved in our society. Dr. Ballinger has two masters’ degrees from Central Connecticut State University, one in modern European history (studying religious dissidents of the Soviet Union) and the other in music education.  He earned his Doctor of Musical Arts degree from the University of Connecticut (2013) in cello performance, with a minor in music history.  His doctoral dissertation, In Quest of the Sacred: Arvo Pärt and Sieben Magnificat-Antiphonen, combines an analysis of the Estonian composer’s music with an exploration of his spirituality and the historical context in which his unique style of composition evolved.  Allan’s interest in Pärt’s music reflects his own fascination with the intersection of music and politics.
Kenneth Long - broadcasting from West Hartford, CT
Kenneth Long, Ph.D. is Professor of History and Political Science at the University of Saint Joseph in Connecticut.  He is the author of two books and numerous articles on American politics, foreign policy, international relations, and political theory.  He was Visiting Fulbright Professor at Johannes Kepler University in Linz, Austria and Concurrence Researcher at Linnaeus University in Vaxjo, Sweden.  He has lectured at various universities in Austria, China, and Sweden.
Steven Raider-Ginsburg (Moderator) - broadcasting from West Hartford, CT
Steven Raider-Ginsburg is currently the director of the University of Saint Joseph’s Carol Autorino Center for the Arts and Humanities — a mission-based, world-class arts presenter that receives over 30,000 guests a year. Steven began his career at New WORLD Theater at UMass Amherst before going on to work with some of the   nation’s most illustrious theater-makers, including: the San Francisco Mime Troupe, Anna Deveare-Smith, Shakespeare and Company, Augusto Boal, Michael Rohd and Sojourn Theater, Steve Cosson and The Civilians, and others. After moving to Hartford, Conn., he co-founded the award- winning, original-creation theater company, HartBeat Ensemble, where he continues to serve as artistic director. American Theater magazine honored him as one of 25 young theater artists most likely to influence theater in the next 25 years and, in 2014, he was chosen as one of Hartford’s 40 under 40. He is a member of the 2012 Lincoln Center Directors Lab, and holds an MFA in Directing from Boston University, as well as a certificate in Curatorial Practice from Wesleyan University. He has served on the Hartford Commission on Cultural Affairs, is a current Yale University Pierson College Fellow, and is an alumnus of the National Arts Strategies' Chief Executive Program. Academic Degrees: MFA, Boston University 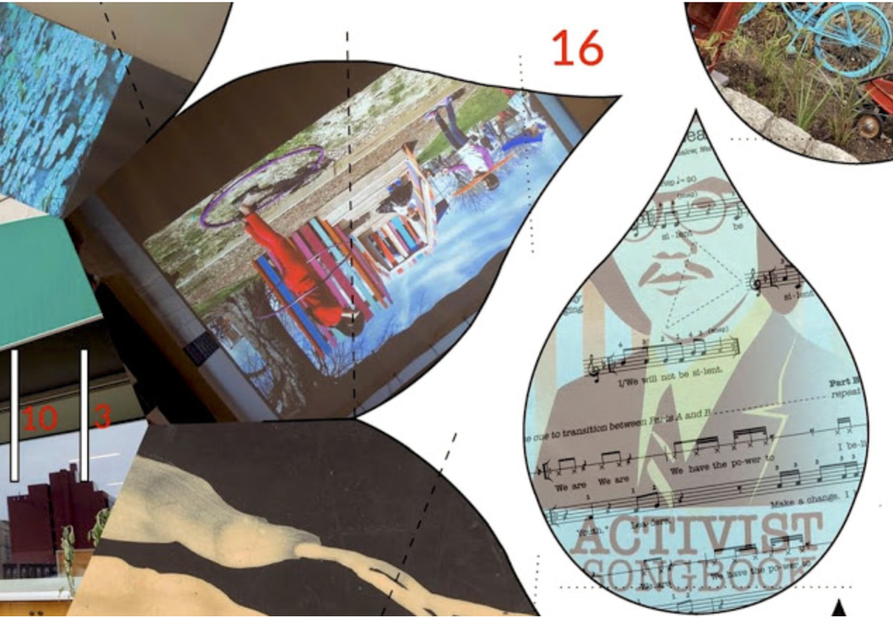 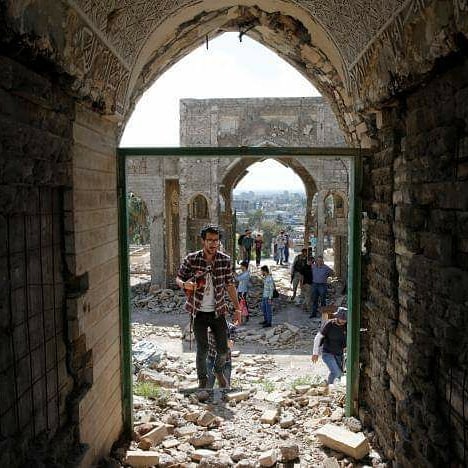