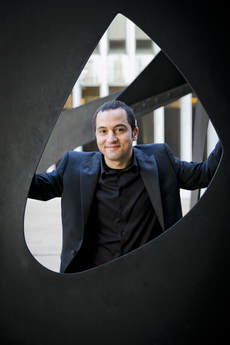 Mohamed Shams (Piano) began his piano studies at the Conservatoire of Music at the Academy of the Arts in Cairo, Egypt, at the age of seven, graduating with distinction in 2004. In 2000 and 2002 he won first prize at the Brevard Music Festival competition (USA), which led to an invitation to play with their orchestra, the Transylvania Symphony, in 2003, and a Fulbright grant to study for one year in Washington DC with Marilyn Neeley.In 2008, he enrolled on full scholarship in the Master’s Program at the Manhattan School of Music, studying with Dr. Marc Silverman, Lawrence Dutton (Emerson Quartet) and Sylvia Rosenberg (MSM, Juilliard School). In April 2011, he won first prize in the School’s Mieczyslaw Munz scholarship competition, and in May, the School’s Harold Bauer Award for a graduating student in recognition of outstanding accomplishment, cooperation and promise.
Enrolled in 2011 on full scholarship in the Master of Music program at the Royal Conservatoire of Music, Glasgow, Scotland, Shams studied with professors Aaron Shorr and Steven Osborne. He graduated from the Conservatoire in 2013. At the RCS, he won the Jock Holden Memorial Mozart Prize, the Royal Conservatoire of Scotland Competition, the Bamber/Galloway Competition and the Tony and Tania Webster Prize for Russian Music. He was the recipient of the Governor’s Prize, and the David Knox Memorial prize for outstanding achievement at RCS.
Upon the nomination of the Royal Conservatory of Music, Scotland, Shams was awarded the Silver Medal by the Worshipful Company of Musicians in 2012.
Shams is currently enrolled in the Doctoral of Musical Arts program at the Hartt School of Music in Hartford, Connecticut, studying with professor David Westfall.
As a soloist, Shams has performed with a number of orchestras, among which the Cairo Symphony Orchestra, the Egyptian Philharmonic Chamber Orchestra, the London Chamber Players, and the Repertory Symphony (USA). At the Beethoven Festival in Bonn, August 2007, he performed the composer’s Concerto no. 3 in the Beethovensaal under the baton of Peter Gulke. In March 2008, he performed the Mozart piano Concerto no. 9 at the Cairo Opera House with The Royal Philharmonic Orchestra conducted by Enrique Batiz. In March 2011 he played Leonard Bernstein’s Symphony no. 2, “The Age of Anxiety” with the Manhattan School of Music Symphony, Philippe Entremont conducting, and in November 2011 he gave the opening recital celebrating the 200th anniversary of Franz Liszt for the International Music Center at the historic Manasterly Palace, Cairo. While in Scotland, he played the Tchaikovsky Piano Concerto no. 2 with the RCS Orchestra in 2012, and the same year made a guest appearance on a Scottish tour - Dundee, Edinburgh, Glasgow - playing Gershwin’s “Rhapsody in Blue” with the Royal National Scottish Orchestra. In December 2013, he performed the Prokofiev Concerto # 3 with the Cairo Symphony Orchestra, conducted by Nader Abbassi, at the New Cairo Opera House. In October 2014, Shams gave a recital in Washington D.C. at the invitation of the S&R Foundation. On January 10 2015, he appeared with the Cairo Symphony Orchestra, playing Beethoven’s 4th piano concerto under the baton of the Venezuelan conductor and violinist Eddy Marcano.  He repeated this performance in back-to-back appearances in Connecticut with the Manchester Symphony Orchestra and Chorale, conducted by Joseph Hodge, and the Hartt School Symphony Orchestra with Edward Cumming conducting.
In 2010 Shams was a semi-finalist at the Scottish International Piano Competition in Glasgow, winning the prestigious Bryden Thomson prize and a one-year scholarship – extended to two – at the Royal Conservatory of Music in Glasgow, Scotland. In July 2011, he joined the faculty of the International Music Academy in Pilzen, the Czech Republic. He has participated in master classes by world-famous pianists including Sergie Dorensky, Nikolai Petrov, Idil  Biret, Ramzi Yassa, Gyorgy Sandor and Nikolay Demidenko. In June 2013, he was chosen to participate in the select Hamptons Pianofest, directed by pianist Paul Schenly.
Shams was the featured artist on New York’s classical music radio station, WQXR, on the McGraw-Hill Financial Young Artists Showcase, hosted by Robert (Bob) Sherman in September 2012, and featured twice again in October 2014, and a fourth time in April 2015.
In addition to his performances as a solo recitalist, Shams has participated in numerous chamber music concerts in Europe and the USA. He is a member of Chamber Music America. He is also an accomplished accompanist.
Mohamed Shams made his Carnegie Hall debut in April, 2015, with a solo recital in Weill Recital Hall.
April, 2015 Shams made his debut in the Brattleboro Music Center giving a recital on Rudulf Serkin’s piano where he was invited again to gave another recital the following year.
Shams also gives recitals frequently for the S & R foundation in Washington DC.
In April 2016, Shams was invited to play as soloist with The Gottingen Symphonie Orchester in Germany for two concerts with great acclaim from the audience and newspapers.
Since September 2015, Shams Joined the Faculty of Community division of the Hartt School.
In Summer 2016, Shams gave recitals and Master Classes in 3 cities in China.