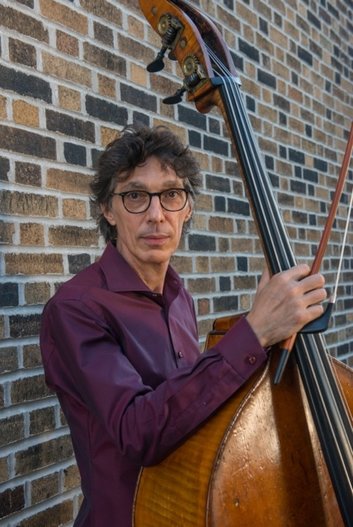 Bassist Robert Black's interests range from traditional orchestral and chamber music to solo recitals of cutting edge music, collaborations with actors, music with computers, movement-based improvisations with dancers, and live action-painting performances with artists.  He has commissioned, collaborated, or performed with musicians from John Cage to D.J. Spooky, Elliott Carter to Meredith Monk, Cecil Taylor to Paquito d’Rivera, as well as many young emerging composers.


Robert is a current and founding member of the Bang On A Can All Stars, New York City’s hard-hitting new music ensemble.  Additional chamber music activities include annual appearances at the Moab Music Festival and the Festival de Eleazar Carvalho in Fortaleza, Brazil.  Collaborative performances include Kathryn Walker and the Music Theater Group (The Odyssey), the Full Force Dance Company (Life, Death, Immortality), films by Rudy Burckhardt, and live action-painting improvisations with the Brazilian painter Ige D'Aquino.
Current projects include a Philip Glass commission for a 7-movement solo Partita that includes recited poetry by 7 of downtown New York’s most illustrious musician/poets, and Possessed, is a series of solo improvisatory outdoor performances in Utah’s rugged canyon/desert landscape, soon to be released in DVD and CD format on Cantaloupe Music.  His solo recordings include the double CD Modern American Bass featuring mid-20th Century American bass repertoire (New World Records), The Complete Bass Music of Giacinto Scelsi (Mode Records), The Complete Bass Music of Christian Wolff (Mode Records), and State of the Bass (O.O. Discs). He has recorded 16 CDs with the Bang On A Can All Stars (Cantaloupe Music) and has also recorded for Sony Classical, Point/Polygram, Koch International, CRI, Opus One, Artifact Recordings, Folkways Records, and others.
A recipient of numerous grants and awards, he recently received the Degree of Comendador - Mérito Cultural e Artistico from the Fundação Educacional, Cultural e Artistica Elezar de Carvalho in recognition of 25 years of distinguished contributions to the cultural and artistic life of Brazil.  He also received a Bessie Award for his collaborative work with Yoshiko Chuma and the School of Hard Knocks.
Robert maintains a full teaching schedule at The Hartt School at the University of Hartford, the Festival Eleazar de Carvalho (Brazil), and is on the faculty of the Manhattan School of Music’s Contemporary Performance Program.


For 10 years, Robert was on the Board of Directors for the International Society of Bassists (ISB), and for 7 years, he served as the editor of the New Score column in the Journal Bass World.  He is currently the Director the ISB’s biennial International Composition Competition. He is a frequent adjudicator for the Concert Artists Guild Competition in New York City.  He is also on the Advisory Board for the international radio program, Art of the States.


Robert performs on a French double bass made by Charles Brugere in Paris in 1900.  He tours with a B-21 instrument that he commissioned from French luthier, Patrick Charton.  His principal German bows were made by W. Renz (1920’s) and Sue Lipkins (modern).